Matthieu “Mpé” Pereira and his teammates joined GamersOrigin in September 2019. Since then, they have been one of the best European teams, reaching the top 4 in Cracow for the very first international LAN and achieving a top 2 and a top 6 in the online tournaments held during the current crisis. Mpé told us the reasons behind GO’s successes and his thoughts on the Apex Legends competitive circuit. 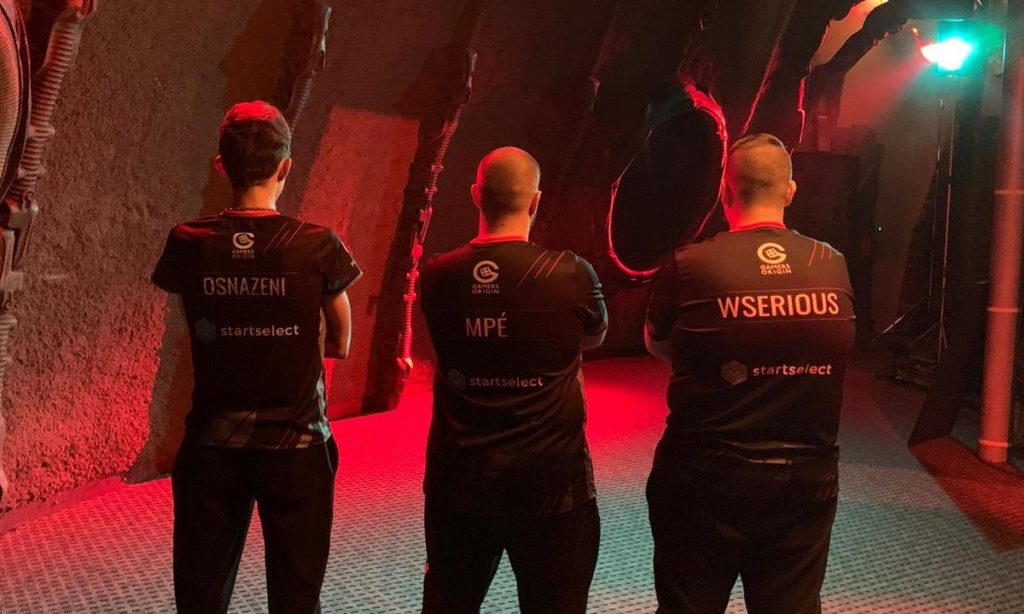 GO: How do you explain your results during the online tournaments #2 and #3?
Mpé: We finished 12th at the second online tournament. In this event, we had the opportunity to play a final again, something we missed during the first tournament, mostly because of technical issues. It felt good to be part of the finalists. There is a very high level in European tournaments, with more than 200 teams registered.

Even if we ended up 12th, we were quite happy with our performance because we were consistent in our playstyle. We lacked the last kills and the last points, it was very close. That’s exactly what we worked on for the third tournament, in which there were a lot of good teams too. We reached the final and finished runner-up, two points behind Gambit.

We didn’t change our playstyle between the two tournaments and it went very well, we knew it will be very close. We have been very consistent during the entire tournament, with no worth results than a top 6. We managed to maintain the rhythm and the balance between offense and defence, even during the final. We managed to exploit all the opportunities the game offered to us.

GO: What is your opinion on the European scene level?
Mpé: I see the scrims, I remember Cracow [GO achieved a top 4 during this event]… The European rosters are above the rest of the world, except maybe some NA teams, which are still very strong and I cannot wait to play against them.

The European teams are very strong, even Alliance or LG can be eliminated very soon. Each mistake can be lethal in this game, as it is in the Battle Royal genre. The French teams are strong too, many of them are present in the final and that pleases me.

GO: How do you feel about the major tournaments being delayed? What’s the impact on the competitive environment?
Mpé: To me, it’s not logic to have so much cash-prize and ALGS points awarded in regions with not that much competitive teams. Tournaments are long in Europe, with several stages on several days whereas, in some regions, less than 10 teams are competing. Things moved a bit but it’s still too much, especially for the ALGS points.

If nothing is done, 10 Korean teams will be playing in majors while 200 teams are competing in Europe and NA.

The tournaments being delayed is disturbing of course but we need to be patient.

GO: Do you think the global ranking will change after the majors?
Mpé: For now, Cracow is our only reference. I think anything can happen, but the teams and players that constantly achieve results will certainly be there. I think the ranking will be made during the upcoming months.

GO: How do you feel about participating in a major in Paris?
Mpé: First, we need to qualify for this event! It will be a great LAN for France and French players, for my family also. It will be their first LAN. They were cheering for me when I was playing soccer, they will do the same.

GO: What are your thoughts on the current meta?
Mpé: The meta is about both the Legends and the maps. Concerning the map pool rotation, King’s Canyon is back, we did not work on it recently even if we still have some habits on it.

Concerning the Legends, the Wraith-Gibraltar-Wattson team composition and the Wraith-Wattson-Pathfinder one are dominant, split at 50-50, even if some teams include Caustic from time to time.

In tournaments, people are mostly playing the zone, trying not to die and surviving as long as they can, with a lot of aggressions during the last minutes.

GO: What are GamersOrigin’s strengths and weaknesses?
Mpé: Our strength is our balance and our adaptability. In a giving situation, we know immediately how to react the best way. We know what to do when we see a fight, we know when we need a break, we know how to spot when it’s the right time for offense or to take a position.

These things come with the long-run because we have been playing together for more than a year now. It’s our strength, but many other teams’ strength too.

We do not really have a weakness, except potential technical issue.

GO: Does the current situation affect your training?
Mpé: We are more disturbed by the current state of the game. The health situation does affect us but we keep training, talking and scriming. The state of the game makes us play a little bit less ranked games. I have talked about this with EA, alongside with other pro players and members of the community. It’s Apex main issue. Once it’s fixed, pro players will start again playing in ranked.

GO: Does Valorant interest you?
Mpé: Of course! I think a lot of people will like the game, even outside the Apex community. It’s an enjoyable game, I played it a bit and it has a huge competitive potential. Riot is very strong at protecting its pro players and its pro scene. I think it will be quite hard to become pro on it, many people will be disappointed and will maybe go back to their original game.