GamersOrigin’s teams have had a very satisfactory week with both an excellent debut for Trec and a slightly disappointing top 4 for our League of Legends players. 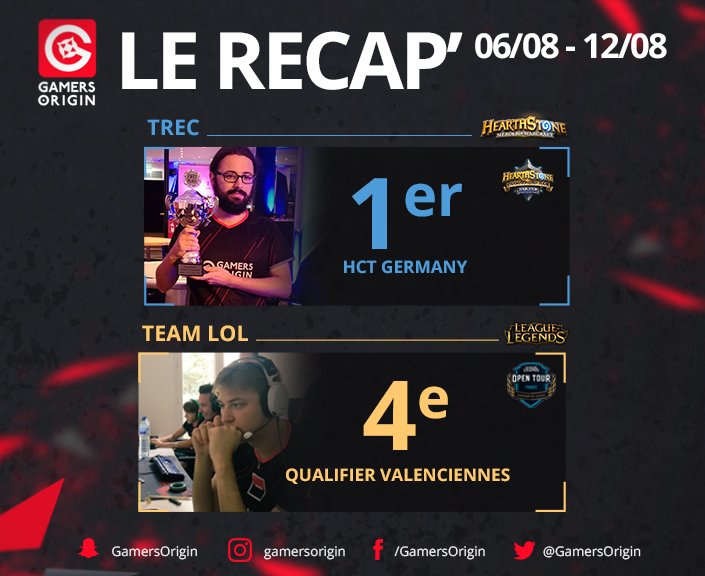 What a debut for Pierre “Trec” Breuil! Member of GamersOrigin since last Thursday, the French player accomplished this weekend his most important victory by winning the HCT Germany Tour Stop offline tournament, second stop of the World tour Season 3. Trec, who finished #1 of his qualifier bracket, did not play inside an easy group, including notably ThijsNL. The Dutch was finally the only player able to defeat Trec (3-0) during this competition. After clinching the second place of Group B, Trec and his Tokens Druid perfectly handled the playoffs, with three consecutive victories against Casie (3-0), Kolmari (3-2) and Kalàxz (3-1). In addition to the title, Trec won 15 HCT points and $5000 cashprize. What a great sign for the rest of the season!

Our League of Legends team did unfortunately not meet the same success. Without Tonerre, absent for personal reasons and rlpaced impromptu by Furuy, our players did not achieve a better result than a top 4 at Valenciennes qualifiers. GamersOrigin lost the “classico” against tournament-winner Vitality. No greater success for the 3rd place match with a defeat against Gentside. Despite this disappointing result, partly explained by the absence of one of our keyplayers, the team remains on top of the LoL Open Tour race with 2340 points, about 100 more than the second competitor, Gentside.

This article was written and edited by: Thibaut LILY